While inflammation is a crucial part of your immune system response to health threats, it can do a whole lot of damage when it occurs out of context.

Research has shown that inflammation left unattended in the body is often associated with the development of harmful diseases such as arthritis, asthma, inflammatory bowel disease, and even multiple sclerosis.

“We have enough information presently to make the necessary changes in our lifestyle to significantly affect the inflammatory process and potentially live longer, healthier lives, with fewer burdens to an overburdened and failing medical system,” said T. Edwards in a 2005 publication.

The biggest factor that we have control over when it comes to inflammation, is our diet. While there are food types that are infamous for causing unnecessary and dangerous inflammation, there are others that have been proven to have the opposite effect.

So what food ranks among the best? Turmeric.

Turmeric has been a big part of traditional Chinese and Ayurvedic medicine for years (used namely for its anti-inflammatory properties) and has been widely adopted by western culture in recent years.

Turmeric is also an antioxidant and is effective in preventing cancer. In fact, one study tested three different kinds of turmeric root and found they all reduced breast cancer, colon cancer, leukemia, and melanoma cancer!

Eating turmeric along with black pepper will increase your body’s absorption of turmeric (bioavailability) by 2000%! Even on its own, black pepper can fight oxidation in your body, and stimulate healthy digestive processes.

Tomatoes are loaded with lycopene; a powerful antioxidant that also gives them their red color.  Not only does it reduce your risk of cancer, but consuming lycopene also helps guard against heart disease by lowering cholesterol levels in your body and keeping your blood pressure low. The bioavailability of lycopene is significantly increased when we eat cooked tomatoes vs. raw tomatoes.

Whip up this quick and easy recipe and begin enjoying the anti-oxidizing benefits of turmeric today!

If you found this article helpful, share with friends and family by clicking the button below! Coconut oil has a plethora of health benefits and can … 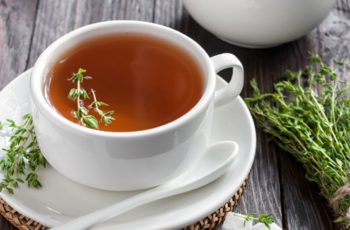 Thyme has been popular for centuries and is commonly used …