From 2000 to the present, Billy Gardell has appeared in more than 50 films. Ice Age: Mammoth Christmas, in which he served as a voiceover actor, also featured his talents. Since 2001, the American stand-up comedian has been married to Patty Gardell, with whom he shares a child.

Today, we’re going to take a look at Billy Gardell weight loss journey and see how he was able to shed 140 pounds so quickly. Are you eager to find out what the secrets are? Then, continue reading to the end, paying attention to every word.

Who Is Billy Gardell?

Billy Gardell, aka William Billy Gardell Jr., was born on August 20, 1969, in Swissvale, Pennsylvania. He’s a multi-talented performer who does everything from stand-up comedy to acting to voice work. When he was 19, the actor was asked to open for comedian George Carlin on stage. That was his big break into the business. On the popular TV show Mike and Molly, which aired from 2010-2016, Gardell is well-known for the leading role of Mike Biggs, a Chicago police officer. 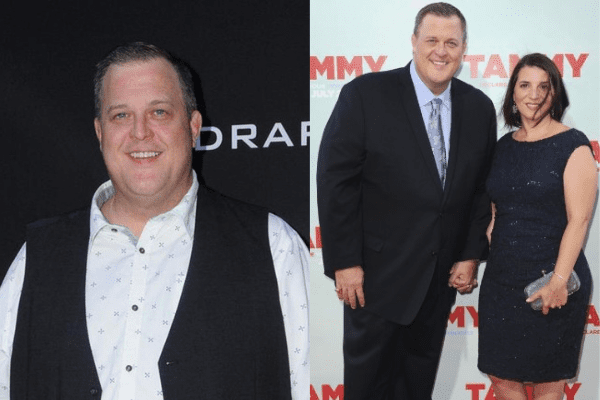 Mike and Molly was a television show about two overweight people who met at an overeaters anonymous meeting and became romantically involved. So it’s not out of the question that Billy Gardell’s weight was a factor in being selected for that role.

The actor did, however, decide to lose some of his trademark weight as the show progressed. At first, he was concerned about how his weight might affect the show’s premise, but Mark Roberts, the show’s creator, gave him his full support, as he revealed in an interview. He said,

“Look, man. Just take care of yourself. We will write it as you go.”

Billy Gardell weight loss journey was made more successful because of the support from those around him. Billy tipped the scales at 350 pounds at his heaviest. The actor’s unhealthy habits, such as drinking and smoking, had contributed to this weight gain. The actor said about his habits, “I feel like my life has been about quitting things.”

His Type 2 diabetes diagnosis served as a wake-up call to better care for his health. So to get control of his weight in 2011, he sought the assistance of an individual therapist and dietician. But in an interview, he said that keeping the weight off was difficult. “I grew up fat,” he confesses. Mike and Molly won numerous awards, including an Emmy, for their show. But the show’s popularity did not shield the actors from negative feedback. Mike and Molly’s critics had suggested that watching overweight people in a romantic relationship was repulsive. In response, Gardell wrote a blog post responding to critics of the show. He said,

“You think I have never heard fat jokes before? I learned a long time ago about life that, hey, sometimes some people just ain’t going to like your face.”

Since childhood, Billy Gardell has been forthright about his battles with obesity. However, the actor admits that he has always been overweight and had to overcome his self-consciousness as he grew older. Billy Gardell weight loss journey has been an open one. It’s as if we’re struggling right along with the actor actually, because he has been so candid throughout his journey. When pressed, Billy Gardell has never shied away from disclosing exactly how he handled what he considers to be one of the most trying situations of his life.

How Did Billy Gardell Lose Weight?

Gardell had to seek professional assistance. Even though he had bad days, he continued to use the services of a therapist, a dietician, and a personal trainer. He disclosed that “There are some days when I feel like rolling in a pizza,” while he also followed by saying that keeping the positives in mind has helped him stay focused.

He once spoke about his trainer with Craig Ferguson in an interview. “I got a trainer. It’s this little Russian guy named Kristi. He is really stocky and just has no emotions, which I respond to.”

During one of his Las Vegas performances, he revealed that CBS had brought in a personal trainer for him. For Gardell, losing weight was about more than just looking good on camera; it was also about improving his health. Billy Gardell weight loss journey was made more accessible with the help of health experts and a dietitian. His unhealthy eating habits had to be changed before he could begin the diet.

According to an interview with Wendy Williams, Billy admitted that despite his love of food, he had to curb his appetite for bad choices to maintain a healthy weight and a balanced diet.

Listed below is his current diet plan, according to media reports: It was not enough for him to have a healthy diet plan; he had to change his bad habits and stop eating unhealthy meals to shed pounds. As previously stated, he removed pizza, sugary drinks, and sodas from his diet.

Billy Gardell did not have surgery to lose weight. When it comes to his weight loss, the American stand-up comedian credits the efforts of professionals in creating a perfect exercise and diet routine, which he followed religiously. Despite his previous claims to the contrary, the actor, who once claimed to have weighed as much as 350 pounds, has managed to maintain a healthy body weight and manageable levels of diabetes thus far. How Much Weight Did Billy Gardell Lose?

At his heaviest, Billy tipped the scales at 350 pounds. As a result of his successful weight loss, Billy Gardell has dropped to a very healthy weight of 210 pounds.

Billy Gardell is 5 feet 11 inches tall and currently weighs approximately 209 pounds (94 kilograms). His current body mass index (BMI) is 29.1 m/kg2. Even though he is still overweight, he is in better shape than ever.

On numerous occasions, Billy Gardell has acknowledged the difficulty of his weight loss journey, which he began in 2011. When asked about his long-term battle with obesity, the actor once admitted that it didn’t get any easier for him as he grew older. However, he has seen incredible results since making the switch from his old, unhealthy habits to some new, healthier ones. When asked how he felt about his weight the last time around he said,

“I am happier and healthier, and that’s most important for me.”

Regular exercise is essential for weight loss, even if you don’t have diabetes. Exercise helps to build resistance, strengthen the core, reduce stress, alleviate depression, and burn calories.

The following are some practical weight-loss exercises:

Billy Gardell weight loss journey has recently become a hot discussion among Billy’s admirers in the American household and on social media. Bob appeared leaner in the fourth season of the CBS sitcom Bob Hearts Abishola than in the previous three seasons since the show premiered in 2019.

As a result, many questions arise in the minds of ordinary citizens and his followers, such as: How did Billy Gardell lose all that weight? Has he undergone weight loss surgery? What is his weight loss transformation secret? and so on.

Even some people believe that his weight reduction is due to illness. The weight loss team included a nutritionist who provided healthy meal plans. When it comes to losing weight, working with a nutritionist makes a big difference; it really expedites your progress.

You’ll get better results from your workouts as well if you stick to a healthy diet.

As an added benefit, Billy worked with a life coach who helped him stay on track with his diabetes management and weight loss goals.

According to Billy Gardell, having a life coach to bounce ideas off can help reduce mental shifts and stress. Having a life coach can help you identify the obstacles preventing you from reaching your goals and devise a plan to overcome each one. Even our favorite celebrities aren’t immune to minor to major health issues in their lives. The real winners, on the other hand, are those who can overcome their problems.

Bill Gardell developed Type 2 Diabetes due to his excessive weight and poor eating habits. His decision to change his eating habits was made at this point. As a result, he made healthy substitutions to his daily routine and diet, losing more than 140 pounds of excess weight in a short period and strengthening his resistance to diabetes. As a result, he’s changed his ways and is now actively participating in a healthy lifestyle.

How did Billy Gardell lose so much weight?

Choosing a healthy diet and a more active way of life allowed Billy Gardell to shed more than 140 pounds of excess weight. He also decided to work out regularly to get better results more quickly.

How much weight did Billy Gardell lose?

When Billy Gardell first started his weight loss, he weighed 350 pounds; he is now closer to 210. Approximately 140 pounds have been shed off Billy Gardell's frame. To put it another way, Billy Gardell used to weigh around 175 kilograms (kilos).

How much does Billy Gardell weigh now? The extremely busy Kelly Clarkson manages her many responsibilities and … When considering gastric sleeve surgery, it is important to know … When it comes to weight loss, there are a lot …