A 72-year-old grandmother insists she has found ‘true love’ with her 19-year-old husband – who says he has ‘never seen attracted to younger women’.

Almeda Errell, from Maryville, Tennessee, fell in love with husband Gary Hardwick at a birthday party, with the pair enjoying a whirlwind romance.

After just two weeks of dating, Gary popped the question and the couple decided to get married, despite their 53-year-old age gap.

Gary – who is younger than one of Almeda’s grandsons – describes himself as ‘really mature for his age’, and had just come out of an unhappy relationship with a 77-year-old woman when he met Almeda.

The couple, who have now been married for two years, say they’re still happier than ever – although they admit that not everyone in the family has been accepting of their relationship. 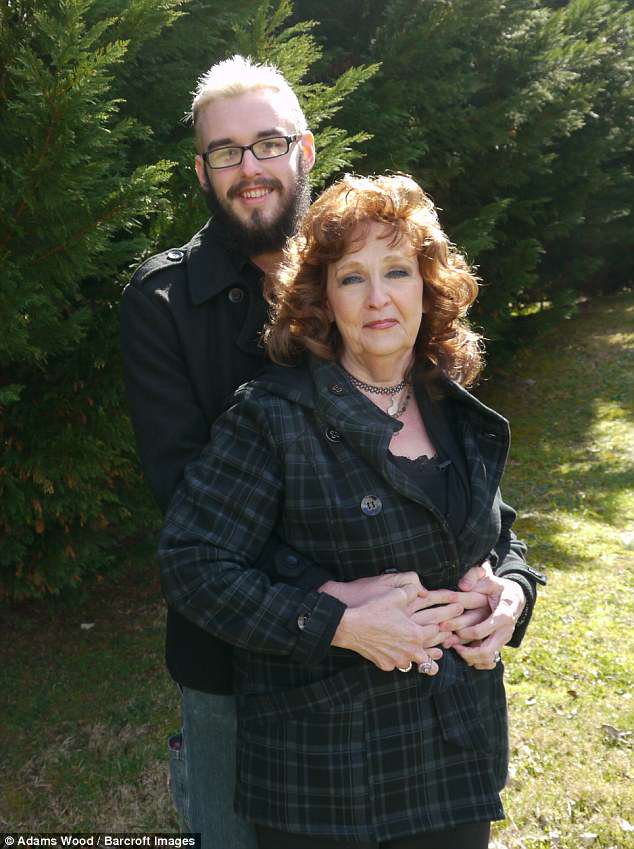 Speaking about her relationship with teenager Gary, mother-of-four Almeda said: ‘If you love somebody, age is just a number.

‘We met at Chuck E Cheese, there was a birthday party there. I looked into his eyes and I just fell in love.

‘I knew he was the one I wanted to spend my life with. I was never intimidated by the age at all.’ The couple, who have a 53-year-old age gap, fell in love at a birthday party two years ago Almeda (pictured with Gary, far right, and her grandchildren) has six grandchildren, including one who is older than Gary

Gary meanwhile said it was love at first sight for him and the grandmother-of-six.

‘The first thing that attracted me to Almeda was her beautiful, gorgeous blue eyes. And her personality, he said.

‘She’s always full of laughter and we just connected so well. The chemistry was great.

‘Everything about her has just captured my heart since day one.’ Almeda and Gary, who have now been married for two years, say they’re still happier than ever The couple tied the knot just three weeks after they started dating. Almeda is pictured here in her wedding dress

Despite the staggering difference in their age, Gary and Almeda have similar interests and hobbies.

‘I never feel as though I’m missing out on anything by being married to Almeda,’ Gary said.

‘I’m really mature for my age, I do not fit into the young age bracket at all.

‘I’ve never been attracted to younger women. Even when I was 13 or 14, I’ve always had an attraction for older women and when I told my grandmother, who raised me, I didn’t know how she would take it. But she accepted us.’ 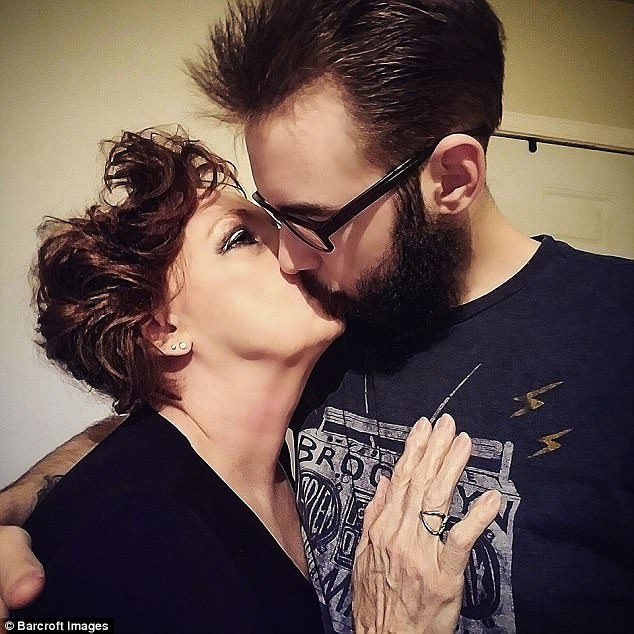 Almeda describes Gary as his ‘true soul mate’, adding that age is just a number 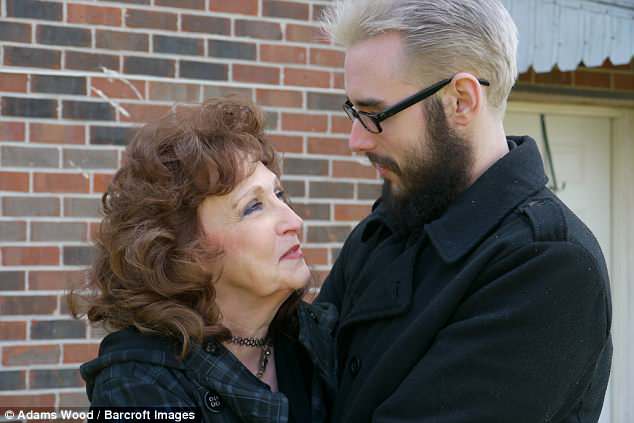 Explaining his decision to propose to Almeda after just two weeks, Gary added: ‘A lot of people wait years to get married and everyone has different opinions on getting married quickly. But we knew we were in love, so I jumped on that.

‘The first time we made love was on our wedding night. It was an amazing experience. There was such a deep connection there. She’s a wonderful lover.’

The couple admits that a lot of people disagree with the nature of their relationship, including Almeda’s son, who hasn’t spoken to her since the day she met Gary.

Aaron and Indiana Elliott, Almeda’s grandchildren, also found it difficult to accept their relationship in the early stages – particularly 22-year-old Aaron, who is three years older than his step-grandfather. 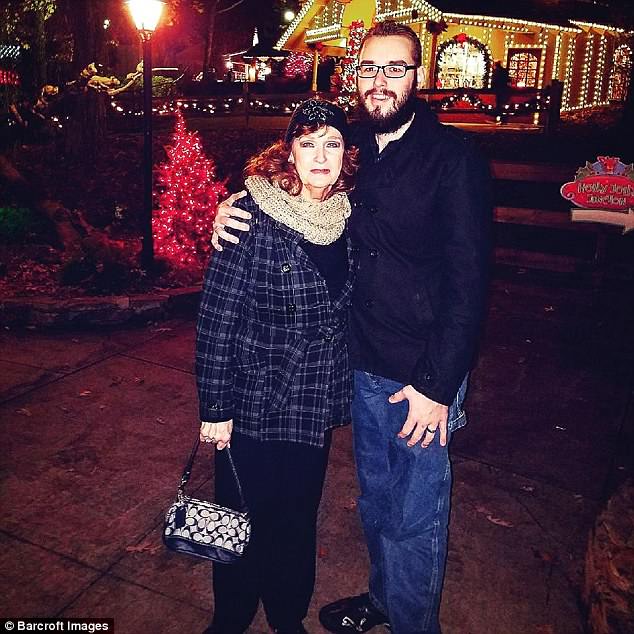 Gary said it was love at first sight for him, explaining that the first thing that attracted him to Almeda was her ‘beautiful, gorgeous blue eyes’ Despite insisting they’re happy, the couple (pictured with Almeda’s grandchildren) admit that not everyone in the family approved of the relationship

Aaron said: ‘I only called him grandfather once and it was when I was drunk. In my head, I see him as a friend more than a grandfather. But you know, our grandmother is happy.’

Indiana, 17, added: ‘How can you not be supportive about that?

‘For me personally, whenever they first got together it was a little bit weird. But I mean, we live in the 21st century and those things really shouldn’t matter.

‘My mom, on the other hand, is very outspoken, because you know there’s an age difference between him and my mom too so it’s a little weird to see your mother walking around with someone the same age as your own kids.’ 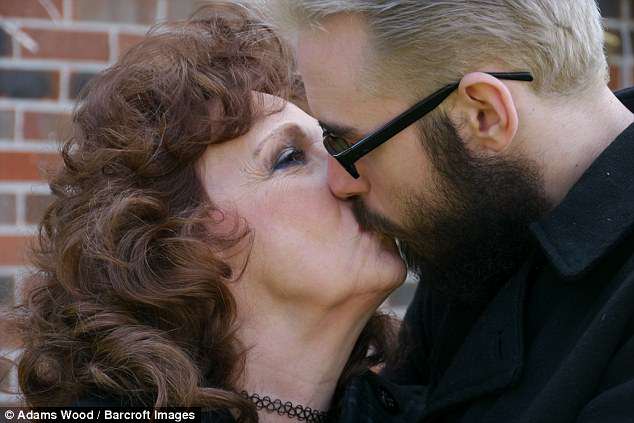 One of Gary and Almeda’s shared passions is YouTube, where they post videos about their love onto their own channel with 49,000 subscribers.

More recently, they have introduced merchandise to sell to their ‘fans’ with pens and mugs that have their faces on.

Gary said: ‘One of the things we love to do together is film videos on our YouTube channel.

‘We do vlogs, reaction videos and pranks. And as far as I know, we are the biggest age gap couple that is YouTubers.’ 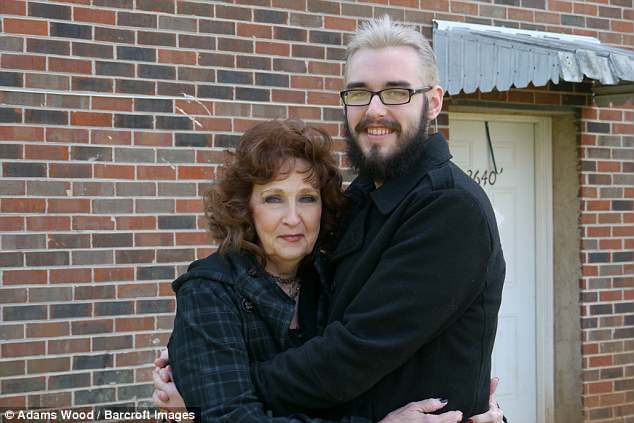 Almeda’s grandchildren admit they find it difficult to accept the relationship in the early stages, but now are glad to see their grandmother happy

Almeda is confident that she will be with Gary for the rest of her life – whilst her husband wants to continue to spread the message that age is just a number.

Gary said: ‘What does the future hold for Gary and Almeda? I believe amazing things.

‘We want to pursue our dreams on YouTube and be able to inspire more and more people every day that age is just a number – it should not matter.

‘As long as you’re in love with that person, you should follow your heart and be happy and be yourself.’ 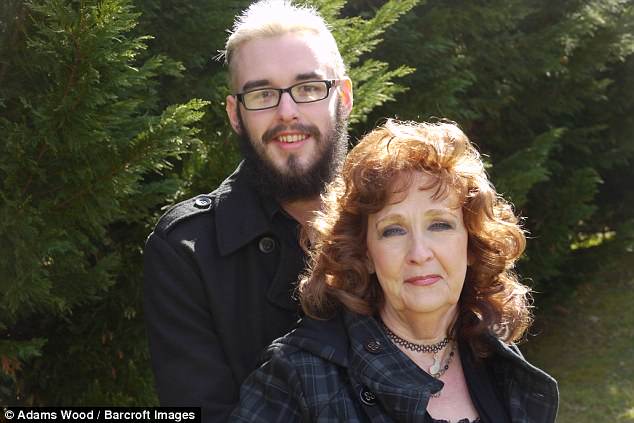 Almeda has previously described how she had been struggling to cope with the death of her first husband Donald and her eldest son Robert, 45, when she met Gary, then 17 Pictured is Gary and Almeda’s apartment in Tennessee, where they live together

The couple had previously described how they had first noticed each other at the funeral of Almeda’s son, before meeting again at a birthday party.

Almeda said she had been struggling to cope with the death of her first husband Donald and her eldest son Robert, 45, when she met Gary, then 17.

‘I’d been married to my first husband Donald for 43 years, and so when he died in 2013 after seven months in hospital from complications with diabetes, I found myself on my own,’ Almeda explained.

‘I’d turn up for work at Walmart in tears and my colleagues would ask me what was wrong. Deep down, I was searching for a soulmate.’

The pair got married within just six days after Gary proposed, in a ceremony which he arranged for just $200 (£137).

Close
Did you find this interesting?
Do you already like us on Facebook?
Do not ask me again for Facebook
Continue to the article »
5
SHARES
FacebookTwitterGoogleWhatsapp